It’s been a few weeks since I last posted. There’s been so much to do for clients and here at the homestead  in recent days that inevitably, I’ve lost track of time. Still….that’s no excuse.

Today we are waiting for another late in the season snowstorm. Unlike the one of the last storms where we got between 10 -12 inches of snow, this one is going to be minimal.  For me, the thermometer has to hit around 60 degrees on a consistent basis before I really start to feel like it’s spring.  The robins, the turkey vultures and such have all returned, but some of the Indigenous folks and the old-timers are warning that the beavers are still hibernating – and until they wake up and start their building projects, we could still get pummeled by another spate of cold and snow. Whether it’s due to climate change or just the cycles of the seasons throughout the years, this spring hasn’t seemed in too much of a hurry to get here. Of course, when does it ever arrive when we want it to? 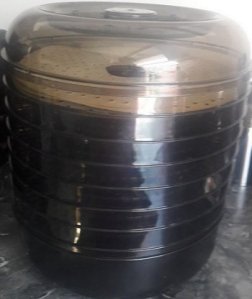 This week, I discovered that I actually had a food dehydrator in my stash o’ household stuff.  It’s one of those old Ronco 7-tray models that you plug-in and let go.  I was able to find a PDF of the instructions for it. All of it seemed pretty straightforward.   The only issue that I had with the dehydrator was the extremely short power cord.  There was not long enough to reach any outlet in my kitchen! I ended up using a heavy-duty extension cord from the garage and that seemed to do the trick.

My first project? I had a couple of bananas that I wanted to make into banana chips before they were black enough to force me to make some banana bread. Not that I mind, of course.  For the record, I love banana bread – and the Frank Zappa Family’s  Rotten Banana Bread recipe that I got years ago off of  L.A.’s “Home” show, has been a favorite in our family for about 30 years.

It took approximately 8.5 hours to dry two trays of banana slices.  Some bloggers, vloggers and books recommend that you dip the banana in lemon juice before drying while others say just cut the banana into 18″ to 1/4″ slices, spread them out on the trays , making sure that they don’t overlap, plug it in and let it go. I tried the latter method and it worked great.  My only issue is that my household inhaled them before I could take any pictures. Ah, well….Maybe next time!  I am considering getting another one of these. The 7 and 8 tray models are being sold on eBay for approximately  $25 to $55.  There are far more expensive ones out there, of course. There are larger ones or those that have an on/off switches, temperature and humidity indicators and a whole lot more features, depending on your budget . Most homesteaders don’t have a lot of dosh to spend, so chances are less is more.  I am careful, however,  never to leave something like this on when I am out of the house.  Being in a log cabin, you become paranoid about any potential fire hazards and just don’t want to take unnecessary chances.

Other projects have included getting seeds started. Some folks say you should start your tomatoes from seed back in February.  I obviously didn’t get that far. My basement was all but freezing then and so I waited. I plan to grow some Roma and Heirloom tomatoes in containers on the deck. We shall see if I was too late or if it will still be ok. Either way, I probably will buy plants at the garden center at our local farm store just to be sure.

We have a full basement under our home and currently it’s floor to ceiling shelving on three of those four walls. Most of it is taken up by my herbal apothecary, however, there is also a substantial amount of clutter that needs to be donated, passed on to a friend or fellow homesteader or just pitched.  I hate to add to the landfill unnecessarily, of course.  But it’s hard to deny that we homesteaders can sometimes have a bit of the packrat in us. Sometimes we really have to put the kibosh on that ever-constant tendency to hang on to things “just in case”.

We also have a similar situation going on in our pole barn type storage shed. It is mostly unused space. It has a dirt floor inside and I confess, I often fantasize about pouring a floor of concrete, or better yet, putting in a wooden floor from salvaged barn boards.  The latter is mostly out of reach. Even out here in farm country, old barn wood brings premium prices and I have seen bidding wars to take down existing old structures just for the lumber.  It will probably be a better option just to rake the dirt and then pour a floor, even if we can only afford to do a slab at a time. We’ve also considered insulating the structure and making the barn into a shop where we can do various projects as well as a place to store tools, farm equipment and keep them out of the elements.

This site uses Akismet to reduce spam. Learn how your comment data is processed.